The description of Sanskrit Shlokas with Hindi Meaning app

Chanakya Slokas (चाणक्य नीति श्लोक)
He played a key role in the establishment of the Maurya dynasty. Chanakya slokas are useful slokas for our day-to-day life and environment. His slokas give us very valuable insight into society and political life. Chanakya (चाणक्य) is one of the greatest people in the ancient Indian history.

Vidur Niti Slokas (विदुर नीति श्लोक)
Vidur Niti, mainly on the science of politics, is narrated in the form of a conversation between Vidur and King Dhritraashtra in the great epic Mahabharata.

Bhagavad Gita Slokas (भगवद् गीता श्लोका )
The Bhagavad Gita is part of the Hindu epic Mahabharata. It is considered by many to be one of the world’s greatest religious and spiritual scriptures.

Sanskrit Slokas On Vidya(विद्या संस्कृत श्लोक )
Vidya(Education) means the wealth of knowledge acquired by an individual after studying particular subject matters or experiencing life lessons that provide an understanding of something.

Prayers Sanskrit Slokas
Prayer is the exercise of faith and hope.

Prayer is an invocation or act that seeks to activate a rapport with an object of worship through deliberate communication.

Valmiki Ramayana(श्रीमद्वाल्मीकीय रामायण:)
Srimad Valmiki Ramayana is an epic poem of India. It is a very beautiful long poem in the Sanskrit language by Valmiki and Valmik is celebrated as the harbinger-poet in Sanskrit literature.

Durga Mantra (दुर्गा मंत्र)
Durga(दुर्गा) is the principal form of the Goddess, also known as Devi and Shakti in Hinduism. Durga means “the inaccessible” or “the invincible”. She is considered to be the combined forms of Goddess Lakshmi, Goddess Saraswati and Goddess Kali. Durga Mantra is considered most effective and secret Mantra and has power to fulfill all suitable desires.

Shiva Mantra
Shiva, also known as Mahadeva (“Great God”), is one of the three major deities of Hinduism. According to hindu mythology lord Shiva is the destroyer in the main three supreme god. There are three supreme gods 1st one is Lord Shiva, Second one is Brahma and third one Vishnu.

Krishna Mantra With Meaning (श्री कृष्ण मंत्र)
Krishna is a major Hindu deity worshiped in a variety of different perspectives.Krishna is one of the most widely revered and popular of all Hindu deities. Krishna is also known as Govinda, Mukunda, Madhusudhana and Vasudeva.

Saraswati Mantra (सरस्वती मंत्र)
Saraswati, the goddess of knowledge and arts, represents the free flow of wisdom and consciousness.

Bhagavad Gita
In a very clear and wonderful way the Supreme Lord Krishna describes the science of self-realization and the exact process by which a human being can establish their eternal relationship with God.

Uninstall the app and install again if you face any problem.
Shop religious things.
Next button on each shloka.
Performance improvements.

How to Install Sanskrit Shlokas with Hindi Meaning APK from ZIP File?

Q – Is Downloading Sanskrit Shlokas with Hindi Meaning APK is Safe From APKNuts ?

Ans –  Yes, We extract the Original apk file from Google Play Store for Our users. So you can safely download Sanskrit Shlokas with Hindi Meaning app from our Apk Downloader website.

Uninstall the app and install again if you face any problem.
Shop religious things.
Next button on each shloka.
Performance improvements. 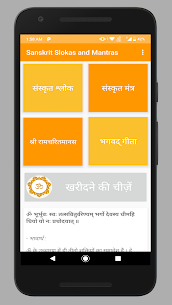 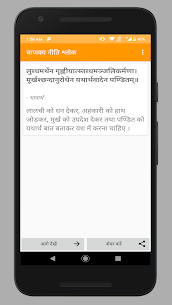 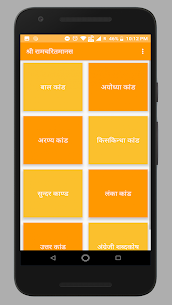 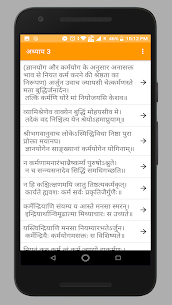 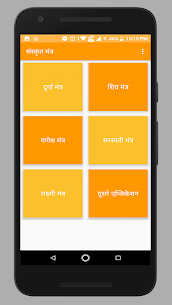 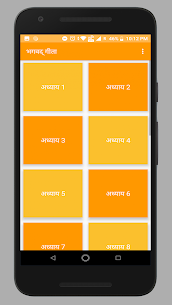 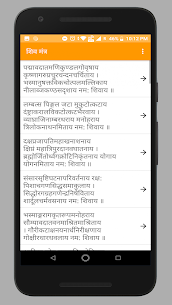